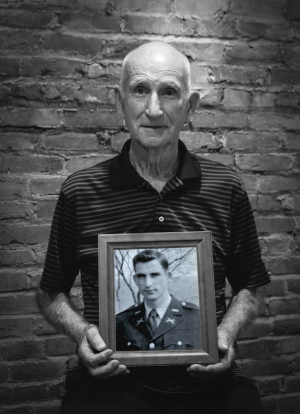 Heaven is rejoicing! Tully Brown Reed arrived on February 20, 2021, with banjo in hand.

A lover of people, nature, music and adventure, Tully inspired those around him, whether family, friends or strangers, to always look for any opportunity for fun and exploration, the humor in every situation, and the good in every person.

Born to HB and Mary V (Schrock) Reed on August 27, 1932, in Hammond, IN, he soon moved with his parents and older brother, Thomas, to Linn County, MO, graduating from Linneus High School in 1950. He studied Agricultural Science at the University of Missouri-Columbia, where he was a member of Farmhouse Fraternity and the ROTC. After graduation, he was in the Army Artillery Division stationed at the DMZ during the Korean War, and became a First Lieutenant.

He returned home to further his studies in Minerals & Soils at MU, choosing next to run the family farm in Purdin, MO, raising Angus cattle and growing Scotch pine and walnut trees. He was well known throughout the county for his Christmas trees, donating a number every year to ensure those who needed one did not go without. His great sense of empathy led him throughout life to constantly help others, wherever he saw a need.

While in the Army, Tully taught himself to play the banjo, much to the chagrin of his fellow soldiers, he always said. He eventually mastered the instrument, joining the Kansas City Shrine Ararat Rockets Dixieland band, recording several albums and making lifelong friends throughout the decades he played with them. His children also enjoyed nightly serenades growing up, as Tully used bath time for banjo practice.

The Masonic Lodge played a significant role throughout Tully’s life following college. He was active for more than 61 years, both as a faithful member and past master of Jackson Lodge #82 and a dual member with Brookfield #86.

Tully met Mary Ann Owen during one of many Colorado ski trips, marrying and introducing the city-born girl to farm life in 1970.  Five years later, after the births of their first three children, Amy (Montgomery), Nancy (Deily), and Andrew, they moved to Brookfield, MO, where their daughter Julie (Freeman) made a surprise arrival.

As they grew up, Tully taught his children (and many of their friends) to play chess, camp, ride horseback, canoe and sail, skate and ski, to drive a stick shift on the farm and freeway, collect rocks, and to generally try anything new at least once, including scuba. In addition to the banjo, Tully played the piano, violin and harmonica with music and by ear, instilling a life-long love of music in his children, and turning family gatherings with Thomas and his musically accomplished family into impromptu concerts.

In later years after retiring from the farm, Tully worked as the caretaker for Immaculate Conception Church, using the basement as a stained glass repair shop for the church windows, and finding a new talent and hobby along the way. He enjoyed making stained glass hearts for his children and their spouses to hang in their kitchen windows, sending them smaller hearts as each grandchild arrived.

Throughout his incredible life, Tully was known for his notoriously dry humor, his gentle, quiet demeanor, and his ability to talk to anyone about anything. He loved his family, and his family loved him beyond compare.

He is survived by his favorite wife of 50 years, Mary Ann; his four children and their spouses: Jason Montgomery, Tim Deily, Stacy Reed and Corey Freeman; six beloved grandchildren: Hayden and Isabelle Montgomery, Grayson and Mena Freeman, Tully Claire and Reed Elyse Deily; his sister-in-law Mabel Tomlin Reed; brother- and sister-in-law George and Sharon Owen; and his seven wonderful nieces and nephews and their families. Tully is surely thrilled to be reunited with his loving parents, brother, father- and mother-in-law George and Anna Owen, brother-in-law Michael Owen, and many friends in Heaven.

A Masonic service will be held at 4:30 p.m., Friday, Feb. 26 at Wright Funeral Home in Brookfield, MO, immediately followed by Visitation until 7 p.m. A Mass of Christian Burial will be held at Immaculate Conception Catholic Church in Brookfield at 11 a.m. on Saturday, Feb. 27, and live streamed via https://www.facebook.com/ImmaculateConceptionBrookfield. In lieu of flowers, please consider a donation to Shriners Hospital for Children, or Immaculate Conception Church in Brookfield, MO.

To send sympathy gifts to the family or plant a tree in memory of Tully Brown Reed, please visit our tribute store.